Today was Bay to Breakers. An annual 12 Kilometers run in San Francisco, where everybody dress up (or dress down to — nudity). Afterwards it turns in to a great festival/street party. I went to Golden Gate Park with Luise and Christian, and it was amazing just chilling and watching all these happy people passing by. 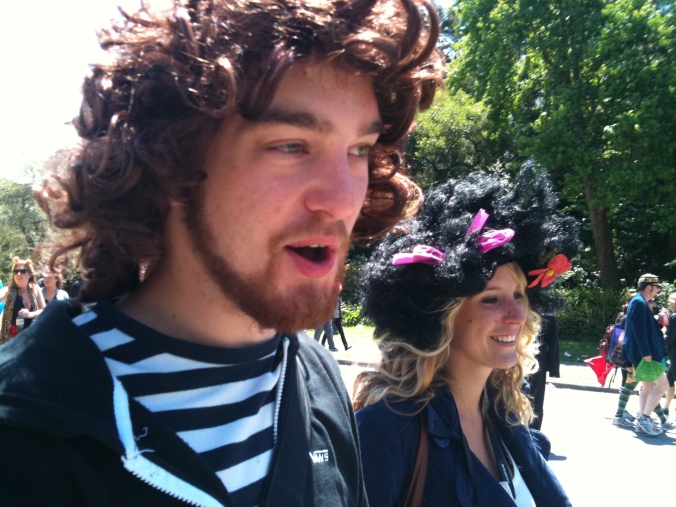 At one poin Luise dragged her bubbles from her bag …

And then we walked down the streets of Haight. Jazz streamed out of a carport with a lot of bicykles hanging on the wall, people sat on stairs drinking and laughing in the sun, and then, suddenly, this:

Computer screen in the Haight.

By the way … now that you have been reading so far down this blog post, I’ll just share a little story with you.

Yesterday I went for my first run since the halv marathon that I ran four weeks ago. Anyways, I had my running clothes on, tied the shoes and put on my little backpack with my video camera so I could shoot some film from the Golden Gate Bridge for a project two of my Danish friends are doing. The Circut remix of Kesha’s song “Blow” blasted in my ears as I started to climb Broderick Street.

A saw a woman doing some kind of signs, and I took out my earplugs. She asked me, if I would do her a small favor. She said, that I would get something for it. I did not really get, what that was. But it was ok. I had time to help her. I had to help her get a furniture up on the top floor of the building, where she lived with her husband. He had just had surgery, so he was not supposed to lift anything.

So we scramble up the stairs with this piece of furniture, in to the appartment and put it down. There was a guitar, and I belive that I saw a viola too – or maybe that is just my imagination. She was originally from Germany she told me. She looked at her husband and ask him, if he had something for me. I did still not get, what it was.

In a corner where the two living rooms were separated there was a closet. It was old school and around 1,8 meters high. The husband opened up the closet. And it was full of … ties.

He showed with his hand toward the ties.

“You can pick one”

I looked at the ties. Some had pink stribes, others were more classic. I picked a dark blue one with light dots. Then I shook their hands, ran down the stairs and went for my run.